Good morning, and welcome to the U-T Arts & Culture Newsletter.

I’m David L. Coddon, and here’s your guide to all things essential in San Diego’s arts and culture this week.

To say that there’s more than meets the eye when observing the artwork of Baseera Khan would be an understatement. Deep within the materials Khan uses in multidisciplinary projects are both inner explorations and experiences with and within a complex world.

“I think about material and its production and infrastructure and how it influences economies,” said Khan, who is the current artist-in-residence at Lux Art Institute in Encinitas and whose works are on exhibit there through June 5. Khan said of the creative process: “I think about some geopolitical things, some historical timelines, and then I hone in on the material based on how it actually creates identity.”

At Lux, the New York City-based Khan has a first solo exhibition in California while working in a studio environment.

Khan is finding Encinitas to be a welcome retreat: “I’m slowing down and taking in the more spiritual end of things while I’m out here. There was a lot of productivity that I’ve been part of in New York, and even though there was a pandemic, I felt like I was working even harder. It’s nice to come out here and take a deep breath.”

The works by Khan on exhibit for viewing — free of charge — at Lux are confronting not only issues of identity but of power and the concept of fast fashion. They ask the viewer to investigate, like the title of Lux’s 14th season, “A New Territory.” 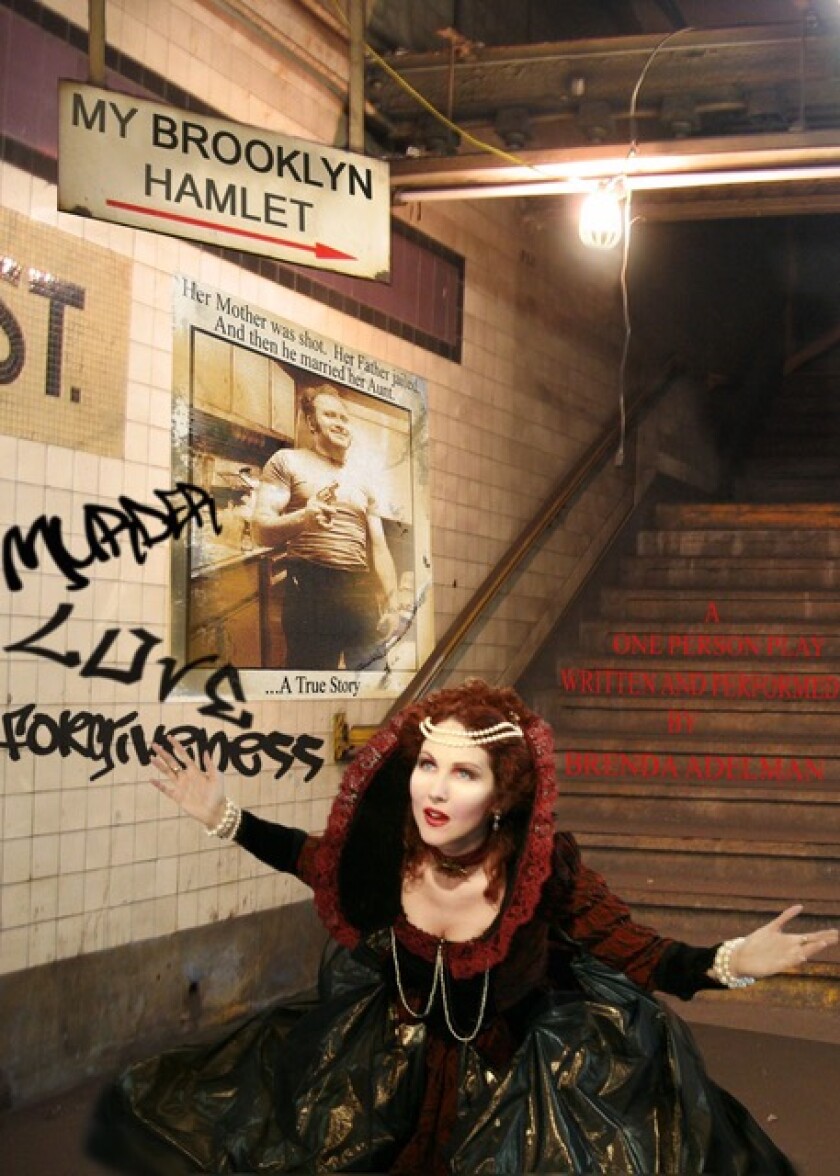 Brenda Adelman in “My Brooklyn Hamlet,” being co-produced on film by Scripps Ranch Theatre and Oceanside Theatre Co.
(Courtesy photo)

Hamlet’s soliloquy was only 33 lines long. Brenda Adelman’s one-woman show “My Brooklyn Hamlet” is a 66-minute-long monologue with its own encompassing tragedy and existential pain. In this co-production between Scripps Ranch Theatre and Oceanside Theatre Company, Adelman relives onstage the origins, the realization and the aftermath of her true-life family nightmare: the fatal shooting of her mother by her father. There’s a Hamletian twist as well: her father would go on to marry her aunt.

In spite of the gravity of this saga, “My Brooklyn Hamlet,” directed by Charles Peters, has its lighter, even humorous, moments — at least in the earlier going. Adelman portrays both her mother — a free spirit and a feminist — and her father, whose cocky endearments for her like “Brenda tha Contenda” scarcely conceal his dark side.

The Brooklyn accents wear thin before too long and, at times in the last half-hour, the weight of Adelman’s personal story feels crushing. It’s quite a road to reconciliation.

“My Brooklyn Hamlet” streams through Sunday. Tickets are $22. 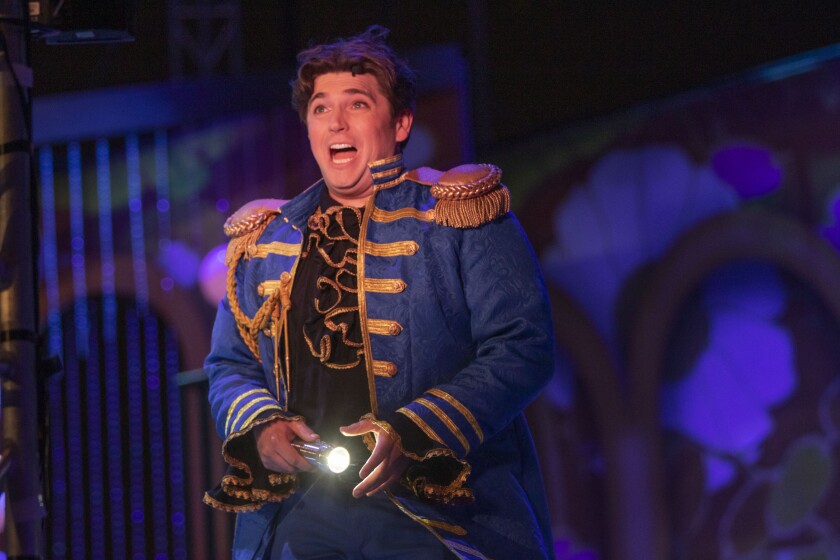 San Diego Opera returned to the Pechanga Arena parking lot over the weekend for a spring festival with a pandemic-themed recital and a colorful production of “The Barber of Seville.” The festival — which continues with two more performances of “Barber” later this week — takes place in the same spot as the company’s last drive-in opera last fall, “La bohème,” but it improves on the formula. Read more in this review by the Union-Tribune’s Pam Kragen.

Let’s venture from Brooklyn to Berkeley. Berkeley Repertory Theatre’s storytelling series “Place/Settings Berkeley” is theater-of-the-mind at its most urgent and thoughtful. The key number here is 10: For $10 you get streaming access to approximately 10-minute-long audio narratives written by 10 different writers. What the tales have in common is their setting at different landmarks or neighborhood haunts in Berkeley. The scripts are either fictional, autobiographical or, as we’re told by Berkeley Rep Artistic Director Johanna Pfaelzer, something in between.

I’m recommending for starters two of the 10 shorts: One is “Suicide on Telegraph,” written and performed by Culture Clash co-founder Richard Montoya. Set in 1959 at Robbie’s Coffee House in Berkeley, this jazz-inflected narrative finds a group of intrepid Chicano art students hanging out with a cool and mysterious mentor called “the Thief.” Rhythmically recited by Montoya with simmering imagery and metaphor, “Suicide” is a head trip back to the time when “the beats were landing on North Beach” and Berkeley was a nexus of art and unbridled energy.

Wistful and heart-rending is “The Character Actor” by playwright Sarah Ruhl (“The Clean House,” “Dead Man’s Cell Phone”), read by Charles Shaw Robinson. The titular narrator is an actor who has succumbed to COVID-19 and, as a spirit, is visiting now-empty theaters across America, including the Berkeley Rep on Addison Street. He mourns the theater’s deserted green room “where burned microwave pizza smells linger” and laments the theater people who have gone or been laid off or worse. “What do I have to give you now,” he asks, “but stories?”

That’s just a sampling. Ten stories at a buck each is too good to pass up. Check out if you’re a Radiohead fan, as I am, the vast multimedia Radiohead Public Library. This free archival website gives you Radiohead music both familiar and obscure along with concert footage, newsletters and lots of art. Yes, there’s a shopping component, but that’s strictly optional. You get so much for nothing, it’s obvious that this is the band’s social-distancing gift to its disciples.

My only nit to pick is the chaotic presentation of the home page and its not being an especially user-friendly guide to the content. 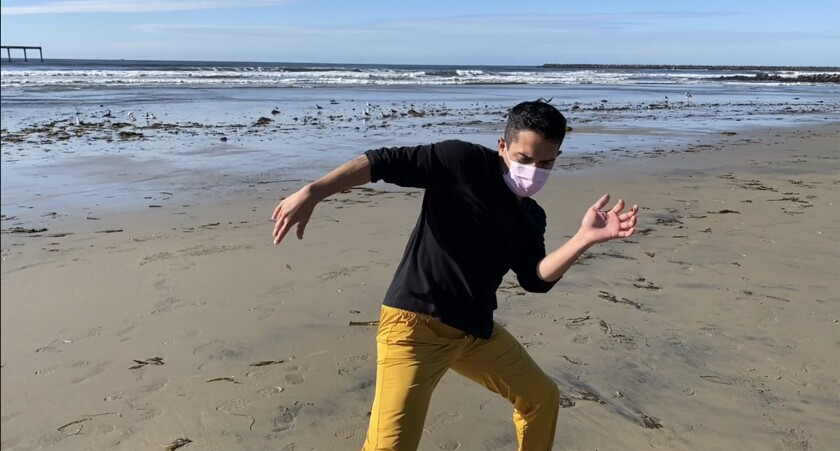 San Diego’s Disco Riot dance company is premiering three new works and screening the film “stories starting with” Saturday and Sunday nights at an outdoor venue in Logan Heights (you get the exact address when you buy a ticket, for $37). Those tickets must be bought by no later than 5 p.m. tomorrow. Andra Day, shown here on the set of “The United States vs. Billie Holiday,” was 12 when she became an ardent admirer of the fabled singer.
(Photo by Takashi Seida / Courtesy of Hulu)

Andra Day didn’t win the best actress Oscar Sunday at the 93rd annual Academy Awards for her riveting title-role performance in “The United States Vs. Billie Holiday,” a category that was won by Frances McDormand for “Nomadland.” But Day’s nomination for her portrayal of Holiday — the legendary jazz singer and civil rights champion — was a victory in itself for the 2003 San Diego School of Creative and Performing Arts graduate. Her shape-shifting performance as Holiday marked her debut film performance of any kind. Moreover, she is only the fifth best actress contender in Oscar history who was nominated for their debut film performance Read more in this story by the Union-Tribune’s George Varga.

University of California Television (UCTV) is making a host of videos available on its website during this period of social distancing. Among them, with descriptions courtesy of UCTV (text written by UCTV staff):

“A Deep Conversation with Rita Colwell”: Rita Colwell is the groundbreaking microbiologist who discovered how cholera survives between epidemics, and the former head of the National Science Foundation. Her book “A Lab of One’s Own” has been described as “a science book for the #MeToo generation.” In it, Colwell documents the pervasive sexism she’s encountered in her career, from sexual harassment in the lab to obscure systems blocking women from advancing in their field. Colwell also witnessed the triumphs that could be achieved when men and women worked together. She offers an astute diagnosis of how to fix the problem of sexism in science.

“’Harmonium’ by John Adams”: The 1981 premiere of John Adams’s “Harmonium” signaled the arrival of a major new talent. A composition for orchestra and chorus that may be considered a “choral symphony” in all but name, each movement is based on a complete poem by John Donne or Emily Dickinson and employ some of the techniques of minimalism in service of a new harmonic language. Today, Adams is routinely cited in surveys as the most frequently performed living American composer of orchestral music, and “Harmonium” is regarded as one of the key works in his creative evolution.

“Environment, War and Conflict”: Several recent reports by the United Nations and other organizations document how refugees, stateless people, and the internally displaced often reside in climate change “hotspots” and may be exposed to unpredictable secondary displacement. The health and safety of these vulnerable populations are under constant threat due to the direct and indirect consequences of war and conflict: the lack of clean air, water, nutrition and housing; the destruction of infrastructure; the disruption of family life; increased exposure to infectious diseases, including typhus, malaria and COVID-19 among others; and psychological trauma. The crisis is growing rapidly and demands a coordinated humanitarian response.

And finally: Arts in the Time of COVID 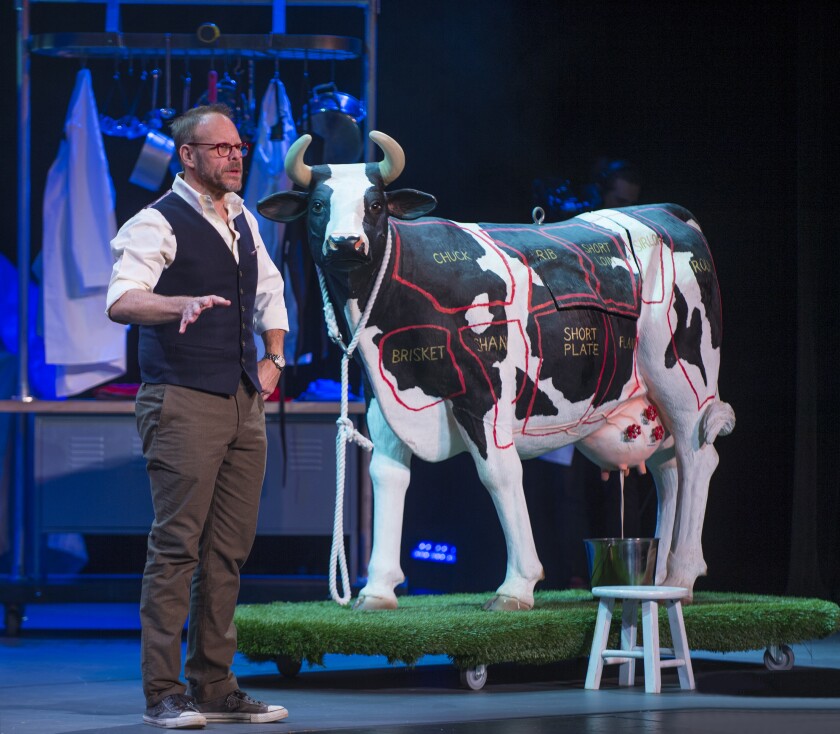 “Iron Chef” host Alton Brown in his touring stage show “Alton Brown: Beyond the Eats,” which will open Broadway San Diego’s 44th season on Nov. 14 at the Balboa Theatre.
(Courtesy of David Allen)