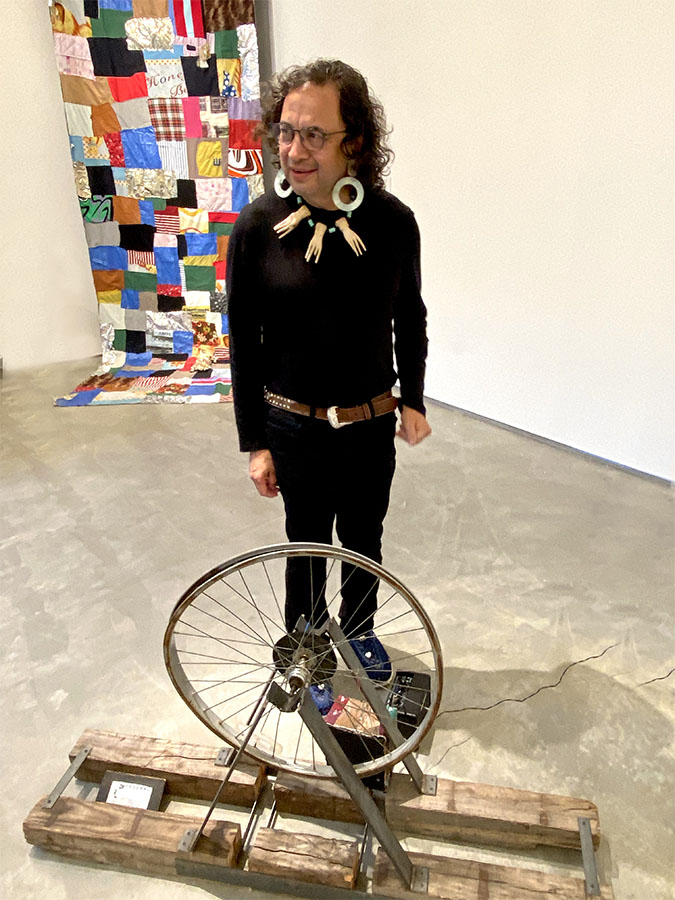 Before the “visual music” concert, Guillermo Galindo posed with Ojo (Eye), one of his sonic devices, a theremin created from a crushed bicycle wheel, wood, steel, and an amplifier. On the wall behind him is Guilt, a patchwork quilt he made for an exhibition in Athens in 2015, after visiting the old airport, where immigrants were held, and finding bits of clothes and fabric that had been left behind. He explained the title: “When the exhibit was over, I got a phone call: ‘Come pick up your guilt,’ they said. So I called it that.”

Can music be visual, and convey social and political messages along with heart-stirring sounds?
According to Guillermo Galindo, this month's resident artist at Lux Art Institute, it can, as was recently proved at a sonically magical and visually fascinating concert on the evening of July 16th, which happens to be the date of the first atomic bomb test in the desert near Alamogordo, New Mexico, 76 years ago.
Galindo calls himself an experimental composer, sonic architect, performance artist and visual media artist, and for years, he has been turning the discarded objects of immigrants and refugees into sonic art. "We do not hear their voices, but we can hear their sounds," he said.
The concert, performed in the Gallery by star percussionists Fiona Digney and Michael Jones, was a revelation of what gifted musicians can do with unusual instruments under the guidance of an unusually inventive composer.  Both performers are part of the dynamic Art of Elan team dedicated to enriching our cultural life with musical collaborations.

It started out with some "rock music"- as the barefoot musicians entered, tapping out rhythmic patterns with small rocks in their hands. Then they went on to explore all the sonic sculptures on display, sometimes soloing, sometimes duetting on a single instrument. The music they made was always surprising, often thrilling, winning the audience's passionate applause at the end.

After the concert, attendees strolled down to the Education Pavilion for the artist’s talk, illustrated with slides from various phases of his impressive career. “All borders are open tonight,” Galindo said. “We are all together because of what has happened and what is coming.”

The talk was enlightening, but the real joy of the evening was the concert—a fabulous opportunity to see and hear Galindo’s sculptures come alive.

Guillermo Gallindo will be in studio at Lux through July 31. His artworks will be on view through August 7.