It was around April of last year when Christine E. Jones says she really began to notice just how hard the COVID-19 crisis was hitting local artists.

“When the pandemic hit, it was pretty clear that artists were going to suffer and were suffering,” says Jones, who has served as the city of San Diego’s chief of civic art strategies since 2017. “We could see it first hand. They didn’t have places to show their work, and while some were able to patch things together with gig work, so much of it had dried up. So we really felt that we needed to do something.”

So with help from the estate of Thomas O. Rasmussen, Jones and the San Diego Commission for Arts and Culture launched “SD Practice,” a bold “art purchase initiative” aimed at purchasing art works from local artists affected by the COVID-19 crisis. The works would then be added to the city’s Civic Art Collection and eventually be displayed at city-run properties across the county.

The city rolled out the request-for-proposal (RFP) submission process last May, with artists submitting their available work, which was followed by a juried section process. Over 500 artists submitted and, with the $500,000 gift from the Rasmussen estate, 100 works were eventually purchased from 89 artists.

“It’s a very diverse sampling of a lot of the practices that are happening in San Diego today,” Jones says. “There was a big range of materials and media. We wanted to expand the collection, but also really have it reflect the diverse talent working here.”

Shortly after the artworks were acquired, the idea was floated for a large-scale group exhibition of the acquired pieces. With museums and galleries still closed to the public, however, the idea was shelved until public gatherings were safe and re-openings were permitted.

One of those people involved early in the exhibition planning process was Andrew Ütt, who was then the executive director of the Lux Art Institute in Encinitas (he now serves in the same role at the recently formed Institute of Contemporary Art San Diego, a merger of Lux and the San Diego Art Institute in Balboa Park). He says the city’s acquisition of the art is a “huge statement” from the city. 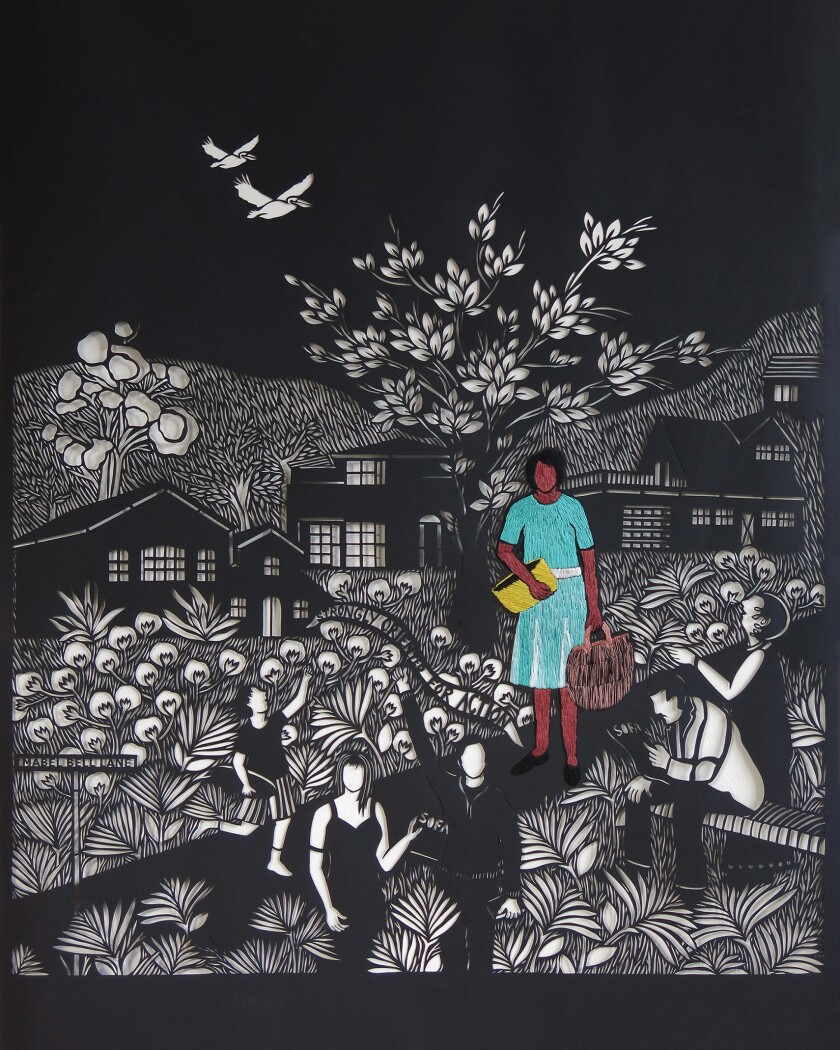 “Whether it’s political content, cultural content or social justice content, there’s all these different perspectives,” says Ütt when asked about displaying the acquired pieces at the San Diego Art Institute. “The challenge now is how do we look at it from all these different perspectives, and how do we organize it in a way that is exciting and people can enjoy it from a deep, personal level.”

Enter Bread & Salt. The owner of the space, Jim Brown, reached out to the coordinators and offered to show half of the works at the sprawling Logan Heights space. The resulting “SD Practice” exhibition will officially open July 10 at both the San Diego Art Institute and Bread & Salt in Logan Heights.

The planning of the exhibition has not been without some difficulties. Even with the artworks being split between the two venues, there are still so many. Still, Ütt, along with Bread & Salt co-curators Isabel Dutra and Thomas DeMello, all agree they’re doing their best to present the work in a cohesive and thoughtful manner.

“While there’s a lot of artworks in the ‘SD Practice’ show, we don’t want to present it as just ‘here’s some art work that was purchased,’ but rather, here’s work that has value and here’s how you can appreciate it,” says Utt.

“Part of the construction we’re doing right now is building new walls in the brick building area and the main gallery so that we can accommodate these large pieces,” says DeMello. He adds that some of the works, such as a William Feeney sculpture of an inside-out shark and a Margaret Noble sound piece, will likely need their own space altogether.

Patrons will be able to view both exhibitions back-to-back when they open on July 10, with the SDAI opening from 4 to 6 p.m. and the Bread & Salt portion taking place from 6 to 8 p.m. Jones says the process of deciding where, exactly, in the city the individual art pieces will end up will immediately begin after the exhibitions close on Sept. 5. Possible city-owned locations include, but are not limited to, libraries, park facilities, community and recreation centers, civic buildings and even City Hall.

“I’m a sucker for a library and would love to see my piece end up there,” says Melissa Walter, one of the local artists whose work was selected for purchase. Known for her abstract mixed-media works, it’s easy to visualize her purchased piece, titled “This Could Not Be the End: Study 6,” among the library stacks.

Another artist hoping their piece ends up in a “small, intimate space like a library conference room” is Andrew Alcasid, a local painter and installation artist known for his use of light and space. He submitted 10 pieces for possible purchase to the “SD Practice” RFP process.

“I was more than happy that they chose one of my pieces,” Alcasid says. “I wasn’t going to get my hopes up, but I wanted to go in confident.”

Wherever the artworks ultimately end up, Jones is confident that they will both brighten and embolden San Diego’s public spaces, as well as reiterate the city’s commitment to supporting local artists.

“That’s one of the most rewarding things with working with a collection like this, being able to go to these places that are outside of the normal four walls; to see people interact with them in their daily life,” Jones says. “That’s a powerful and impactful thing.”

Combs is a freelance writer.